Warning: A non-numeric value encountered in /home/customer/www/companystoryandbrand.com/public_html/wp-content/themes/Divi-3/functions.php on line 5841

When people ask me for advice on how to brand themselves, I sometimes suggest they watch reality TV.  I know… odd right? But a show like Married at First Sight makes it easy to illustrate a few points because I’ve found this show to be more open and authentic than other reality TV shows. If you’re in the process of building your own brand, this exercise can help.

Instead of focusing on what’s working or not with your own brand, detach a bit and pretend you’ve been asked to craft a new brand for one or two of the people you see on the show. After watching about 3-4 episodes and reading through the #MarriedAtFirstSight Twitter feed, ask yourself a few questions about the people you’ve seen:

By simply watching the show and asking these types of questions, you can really predict who has an exciting brand waiting to unfold, and who might fade into the background after a few interviews. But that’s not all – the answers to questions like the ones above have far-reaching impact. Using questions like these, I have developed:

So… now let’s get back to your brand…

This mini-exercise provides a few things to get your brain moving – but admittedly it’s sometimes difficult to do a proper for your own brand. Here’s where I’d suggest getting an outside party or focus group together to do an evaluation for you using whatever content or concept you’ve created so far. I think it’s important to have a new perspective, so finding a professional or unbiased analyst is ideal. If you have some followers, use your Twitter, Google or Facebook analytics data to get a sense of which content you produce that people resonate with.

I am fascinated by both the instant controversy and the disruption opportunity sparked by Married at First Sight – a new reality TV show on the FYI network. Promoted as a social experiment, complete strangers are first matched by experts, and then subsequently married without so much as a handshake or first glance. The show’s concept met with much skepticism and outright criticism prior to its debut; many feeling that it made a mockery of traditional marriage and family values.

Now that a few episodes have aired I see the tide changing. Throughout my Twitter feed, Married at First Sight is now widely praised as relatable, authentic and different from “regular” reality TV.  The experts on the show include: Chaplain Greg Epstein and Drs. Joseph Cilona, Logan Levkoff, and Pepper Schwartz – each of whom are very well positioned to launch the next eHarmony.com. Founded by clinical psychologist Neil Clark Warren, eHarmony.com has topped over a billion dollars in cumulative revenue by focusing on compatibility questionnaires without the benefit of its own reality TV show.  I think the Married at First Sight concept could be expanded to give tired daters immediate access to their end goal – making me wonder whether this is the new multi-billion dollar success formula for  marriage sites.

This social experiment has the ability to be an influencer in the wider matchmaking market as well. So even those companies and experts outside the show in any matchmaking, wedding planning, coaching, or love-connection company can maximize on this reality TV trend by entering the conversation socially or by adding a new twist on their marketing campaigns and/or service offerings.

Though we are only a few episodes in – should successful relationships emerge between the couples – I can foresee that there will be plenty of consumers who long for the same type of service.

Forget The Bachelor/Bachelorette concept – I think FYI is onto something. Let’s see who rides this reality TV trend… 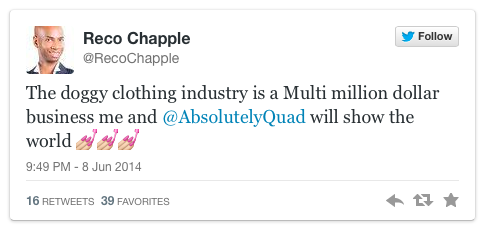 I am a dog person. And though dogs will never rank up there with my kids, I can definitely relate to having a well-groomed pooch. But Quad Webb-Lunceford of Married to Medicine fame, is taking this concept to an altogether different level. She’s launching a new line of couture clothing for dogs called Picture Perfect Pup. And of course I’m fascinated by her brand concept and how reality TV will impact her launch.

First let me just tap into Twitter demographic mode for a moment… This morning I read a tweet from her design partner Reco Chapple….

I adore this man’s energy! And industry numbers have even better news.  Overall US sales in 2014 for all pet supplies (within which doggy clothes fall) are forecasted at $13.72 billion dollars. That’s billion with a big ol’ B. So while not all of this segment is about puppy clothes – it is a pretty sizable market.

At the same time, the pet industry is contracting a bit. This market now includes fewer dog owners overall; and even fewer who will ever make the investment in a luxe doggy brand – no matter how adorable or well promoted. Luxury brands are always exclusionary. My thought is that they should take a look at the well-executed examples of “Affordable Luxe.”  You do remember the collaboration between Target and Neiman Marcus for the myriad of designers that they’ve launched at Target stores? I bet this would be a very viable angle for Quad’s team to consider because it can convert more of the viewing audience delivered by BravoTV into customers. For Married to Medicine the average number of weekly viewers for their new episodes is about 1.8 million people.

So Quad can thank both Bravo and Mariah for making her relevant. (I’m completely kidding about the Mariah factor – but Mariah has a great brand concept brewing too if she’ll take note. I’ll discuss that in my next post.)

So here’s what I love about Quad’s new venture. First, it’s an extension of who she is. She personally comes off as likable, charismatic, driven and original and that bodes well for her emerging brand.

I also love how she’s added a non-profit to the mix to raise money and awareness for Canine Companions for Independence. This was a really good move. Her argument that she’d purchased school supplies just didn’t lend enough credibility to counterbalance the “superficial factor” raised by her husband on the last episode.

I think her brand will also scale really well. She can extend her line beyond clothes and offer accessories and other products.

There is definitely a market for her brand if it remains a pure luxury offering.  I can envision this in boutiques frequented by the pet-pampering, disposable income set. However, I think “Afforable Luxe” branding concepts are the way to go for bigger profits.

I’ll be watching to see how Picture Perfect Pup is ultimately rolled out to retailers. I can’t wait to see the particulars.

I’m just going to jump into the fray here. And it’s going to seem sudden to some of you – but I’ve been a die-hard fan of reality TV since I can’t tell you when. My local Atlanta market is teeming with reality stars – and so I’ve decided to launch my self-indulgent series entitled Branding Reality. Here I’m going to talk about my fascination with the shows and the brands and business opportunities that emerge and soar from the fifteen minutes of fame afforded to all.

There is an art to making reality TV work for you and not against you. In fact I think you MUST enter the whole realm with your eyes wide open and a real plan in order to reap the deeper benefits. Because let’s face it, you give up sooooo much of your privacy and sense of peace to be on these types of shows that it better pay off for you in the long run.

Thankfully, most of the women on the Real Housewives and Married to Medicine (Bravo franchises) seem to have a plan – or else they’re coached by others to help them get to the next level.  And though it makes for good gossip some of the reality stars just aren’t prepared for the spotlight and I’ll highlight those cringe-worthy/brand-decimating moments too…

In any event –  let’s get started… My current favorite standout from Sunday’s episode is Lisa Nicole from Married to Medicine. Let’s just say that judging by her website she’s not new to branding and marketing. Her nickname is Ms. Millionaire Maker – so it’s really no surprise that she came on the show this season primed and ready to go.

I’m going to state the obvious here – these shows are edited for ratings and are frequently designed to cast people in such a poor light in order to build the hype. But so far Lisa Nicole’s personal brand get’s an A +. She comes off as approachable, authentic and secure – no doubt balanced by her off-screen accomplishments.

Lisa Nicole’s branding lessons for you: She is the poster child for multiple streams of income and it all intertwines beautifully on her website. Just to do a bit of geeky analysis here – Did you notice the name of the MLM organization on BravoTV? Her marketing and coaching programs seem to leave it off as well, which kind of suggests that she discovered the secret of doing well in an MLM structure.  Either get involved early in a successful MLM and really work to build your downline or funnel the traffic off into your own side-hustle. Kudos – that’s well played.

I’ll also be tweeting along with the shows to provide my insights as they occur to me – so follow me @costorybrand on Twitter.